What are the good things during the COVID-19 situation? Organized by We Oneness, SHDM Foundation and Thai Health Fund

In the past, we thought that we were winning against viruses because we had developed antibiotics and vaccines that prevented diseases such as smallpox that have disappeared. We also expect that polio, tuberculosis and malaria will end, too. There are 3 lessons that we can learn from COVID-19

We have to find a balance between careless and craziness. And, also be aware that not only is the Corona virus spreading, even though the COVID-19 harms our body. Our fear is spreading and harming our minds, and even impacting our humility, causing us to become selfish, looking down those who are infected.

We buy masks, alcohol and other things, even though they may not be necessary, especially for those who are not infected. Now, masks are out of stock throughout Thailand, and are not available for those with tuberculosis, pneumonia or influenza. The shortage of face masks has serious repercussions as it means that caretakers, and medical persons such as doctors and nurses do not have masks. Warnings are being given to people who are not sick that they shouldn’t buy and use masks. This demonstrates that the COVID-19 disease is less harmful than fearing the COVID-19 itself. Therefore, we need to prevent both the COVID-19 infection entering our body, as well as preventing the fear of COVID-19 from infecting our mind. Let’s support each other on both levels.

This situation has the potential to help us to reduce our selfish behaviors and increase our generosity to support each other. We need to stay connected and encourage people to express their goodness from within which ultimately helps others. 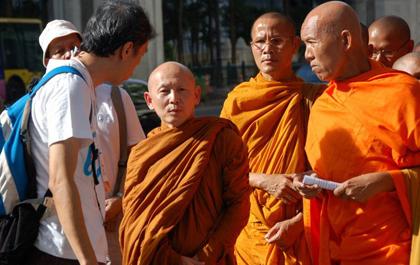 Join Together Through the Crisis

I have a good story to share with you. This story is from Japan, many years ago, where a carpenter repaired and rebuilt a house. This house is a one storey building where the wall was built by two pieces of wood with a hollow space in the middle. After tearing down the wall, he found a lizard stuck inside because a nail from outside was hammered into one of its feet. The carpenter looked into it and was curious about how long this house gecko had been stuck inside and found that the nail was hammered into the house gecko about five years ago. He was surprised that the lizard was alive although it had no ability to gather food. He was curious and tried to find answer. Then he realized that another lizard came every day to feed the vulnerable lizard, even though the second lizard didn’t gain any benefit from feeding the first one.

In nature, when animals face danger or difficulty, they will try to help each other. This may be an animal instinct to care and share loving kindness to each other. We see this not only with reptiles, as it can also be seen with birds. Two parrots that were trained by a human being were caged together and became attached to each other. The parrot on the left could show its head outside the cage to communicate with the trainer, but the parrot on the right could not do that since there was no hole in that side of the cage.

The parrots were trained to exchange small stones for peanuts. The parrot on the right had stones, but the one on the left didn’t. Even though, the right one could not exchange stones with the trainer, it was happy to give the stones to the other parrot that could communicate and exchange the stones for peanuts with the trainer. The right parrot knew that he/she would not benefit by doing that, and yet was still happy to support the other.

We can see that animals care for and support each other. How about us as human beings, especially during times of crisis?

More than one hundred and fifty years ago, two big sailing ships wrecked and were castaway on different sides of Auckland Island, New Zealand. There two boats didn’t know about each other, nor that that they had been wrecked and castaway in the same time period. The Invercauld, en route to Chile, wrecked on the northwestern end of the island, had 19 survivors that swam to the island. After one year only 3 survived the winter. The other boat named the Grafton, on its way from Sydney, Australia, had 5 survivors. Two years later these 5 people still survived. What are the differences in these stories of two separate shipwrecks? The survivors of the Invercauld should have more collective strength than the Grafton, because it had more survivors.

When looking into the details and we can see that when the Invercauld’s survivors arrived at the island they just disbursed and didn’t care for or help each other. When they moved up to the cliff they didn’t support each other, split into small groups and fought among themselves. When someone died the others ate the dead body. Whereas, people from the Grafton supported each other, consulted with each other and helped learn about survival skills together. They also learned many other things from each other such as their languages, mathematics and other subjects. Consequently, their rate of survival was 100 percent.

Day by day the news reports show that this crisis is worldwide, reaching far beyond Thailand and Asia. So far more than 8,000 people have died because of COVID-19, and some estimates project that it will kill over a million people during one and a half years or in an even shorter time. We are facing a crisis which is in front of us. If we just want to survive alone that will create more problems during this crisis. We need to look to one another and find ways to support each other that can reduce the possible damage that is confronting us at the moment and in the near future.

Supporting each other at this time must be different from other crises that we have faced. During other crisis we may join hands to support and help each other. However, during this time we may be distancing or quarantining ourselves, especially those who came from high risk areas, in order to prevent spreading the virus to others. This is difficult and uneasy for all of us, but we need to think about other persons that may become infected by us. This is the ‘new normal’ and a basic requirement for all of us at this time. We need to be uneasy, uncomfortable for others, not just walk to places as usual. These will create danger to others and oneself.

Beside ‘social distancing’ ourselves from others, we need to look at what else we can do, for example, making masks to donate to others who don’t have them, or sending information to others to help them be aware of the situation and be able to protect themselves. There are some countries we could see that they try to survive by themselves, and are not caring about others, not sharing masks with others.

We can take lessons learnt from the survivors of the 2 shipwrecked boats. We learned that even though the Invercauld had many more survivors than the Grafton, the majority didn’t support each other because of their divided and selfish attitudes. Consequently, the small number who survived may will feel guilty that they survived without the others which wounds them deeply in their mind. Once again, these are true accounts of how human beings responded in times of life-threatening crises, with very different outcomes.